By Benjamin Ivry poète: « … The septuagenarian Israeli novelist and poetry translator Esther Orner would hardly seem threatening to anyone. Yet Orner, who has translated Yehuda Amichai and Aharon Shabtai into French, has become the center of a frantic dispute in France.

The University of Provence, based in Aix-en-Provence and Marseilles, has just canceled a March 2011 colloquium, “Writing Today in the Mediterranean Region: Changes and Tensions,” after a group of Egyptian and Palestinian writers, whose names have been kept confidential by the University, objected to the presence of an Israeli. In response, the colloquium organizers immediately canceled Orner’s invitation.

Orner told the French newsweekly “Le Point”: “That’s the second time I’ve been boycotted; it’s becoming routine…I might add that I am particularly shocked to see foreigners dictating to a French university what it must do.” After news of their action became public on July 12, the organizers issued a press release headlined “We Never Boycotted Israel,” claiming that the colloquium was intended to mainly focus on Arab literature, so their only choice, apart from canceling the event altogether, was to disinvite the Israeli.

Orner countered that she had not known that for France, Israel is no longer a Mediterranean country. Finally, the University of Provence’s president canceled the entire colloquium.

Orner was born in Magdeburg, Germany in 1937 to a Polish Jewish family that fled to Belgium in 1939, where they spent the war in hiding. Orner moved to Israel in 1950 but spent most of the 1960s and ‘70s in France as a Hebrew teacher. She moved back to Tel Aviv in 1983 to teach translation at Bar Ilan University, give Hebrew lessons to new immigrants, and write. Only in 1999 did her first novel, “Nobody’s Autobiography” (Editions Metropolis), appear, recounting a difficult mother-daughter relationship in a family of Holocaust survivors.

“Nobody’s Autobiography” was followed by 2001’s “Final and Last,” also from Editions Metropolis, a kind of epistolary Kaddish for her mother who had recently died. Orner then published two more titles: a 2004 book-length diary, “Such an Ordinary Year,” about the daily violence of terrorist attacks during the Second Intifada, followed by 2008’s “Grammatical Tales and other minor stories,” a collection of characteristically wry short fictions. The same year, Orner’s anthology of translations of Israeli women poets, “Each One has a Name,” appeared.

Whatever the University of Provence may think, Orner is a splendid writer who deserves better…. » 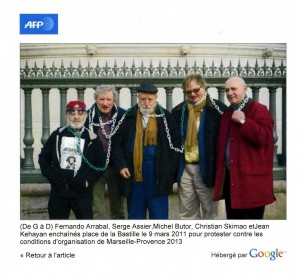