Sakineh Mohammadi Ashtiani will not be stoned. Faced with international pressure, the Iranian authorities have announced that they will not carry out the sentence handed down by the judges.

But wait: Sakineh Mohammadi Ashtiani is not out of the woods. She still faces the possibility of what is referred to primly in Iran as a substitute punishment. For example, she may be hanged.

What crime did Sakineh Mohammadi Ashtiani commit? What unthinkable crime caused this 43-year-old mother, four years ago, to receive ninety-nine lashes and later to be sentenced to be buried alive up to the neck while a gang of men pelted her head with rocks until she died? I repeat, what is the crime that, today, after Iran’s embassy in London has announced the exceptional commutation of the sentence of stoning, obliges Sakineh Mohammadi Ashtiani to wait on death row in Tabriz prison while the authorities settle on another sentence, one equally horrifying if seemingly less brutal?

Her crime, her only crime – a crime that she denies having committed and that three of the five judges who have ruled on her case strongly doubt she committed – that crime, for which, as I write, she may be savagely executed, was to have had extramarital relations with a man … several years after the death of her husband!

The accusation would be merely grotesque if its consequences were not so abominable. 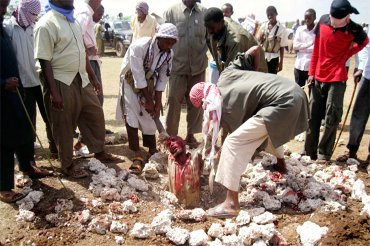 It might be allowed to pass quietly into the lengthy record of the feckless and foolish acts of totalitarian states were it not for the fact that at least six persons (five men and one woman) have been stoned since 2002, despite a supposed moratorium on that form of punishment.

I would add that this moratorium, one that does not actually prevent stonings from taking place, is deemed null and void by various religious, political, and judicial authorities in Iran. Keep in mind that Ali Reza Jamshidi, spokesman for the Ministry of Justice, declared in January 2009 that the concept of moratorium had no meaning under Iranian law. Remember, too, that the Revolutionary Guards are fighting tooth and nail to keep image-conscious pragmatists from purging stoning from the new penal code. (Yes, stoning is still in the code.)

For all of these reasons the case of Sakineh Mohammadi Ashtiani is vitally important.

For all of these reasons we must join the wave of opinion that has gathered force in Canada (through the site www.freesakineh.org launched by Heather Reisman, Marie-Josée Kravis, and others), in the United Kingdom (with the appeal that appeared on the front page of the Times of London on July 9, and that I signed), in the United States (thanks to my friend Arianna Huffington and others), and now in Brazil (thanks to the efforts of Luis Schwarcz, head of the Companhia das Letras publishing house).

And it is for all of these reasons that, in Europe, I am urging the friends who have fought alongside me for so many years to join the movement. I am appealing to the readers of my review, La Règle du Jeu and to the men and women of good will who read my weekly columns in the Corriere della Sera, El Pais, the Frankfurter Algemeine Zeitung or, of course, The Huffington Post. I ask these readers – I ask you – to contact the Iranian authorities responsible for Sakineh Mohammadi Ashtiani’s case and to request that they rule out execution of the accused by any means, clarify the legal status of the accused and inform her lawyer of that status, and rethink their opposition to removing from the penal code a punishment-stoning- that is a shame for Persian culture, a punishment that enlightened Muslims everywhere know to belong to an age long, long past.

Your appeal should be addressed to Ayatollah Sayed Ali Khamenei, supreme leader of the Islamic Republic of Iran, whose e-mail address has been made public by Amnesty International: info_leader@leader.ir. Or you may send a letter through the supreme leader’s website.

Letters should also be sent to Iran’s minister of justice, Ayatollah Sadegh Ardeshir-Larijani, at the following address, as provided by Amnesty International: Office of the Head of the Judiciary, Pasteur St., Vali Asr Ave., south of Serah-e Jomhouri, Tehran 1316814737, Islamic Republic of Iran.

Copies may be sent to the head of Iran’s High Council for Human Rights, Mohammad Javad Larijani, at the same address.

These officials must be inundated with communications.

They must be made aware that the world’s eyes are fixed on Iran and on the fate of Sakineh Mohammadi Ashtiani and the eleven other individuals (eight women and three men) who wait on death row to know whether they will be stoned.

Iran’s officials must be reminded that a great country, one heir to a great culture, cannot cling to punitive practices of such flagrant barbarism, practices that so clearly contravene the international human rights conventions to which Iran is a signatory.

Act quickly, friends, I implore you. We do not have a minute to lose if we wish to save Sakineh Mohammadi Ashtiani and her eleven companions in adversity.